My father owned a 1964 Ford Zodiac MKIII. If you want to know more about why and when  you can read it on this page.  After a partial restore and a complete respray, he continued to enjoy the car (his childhood dream) for several years. But eventually he used the car less and less… At some  time the only one that really drove the big Ford was me. 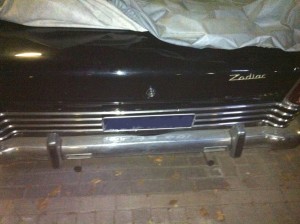 How the big Ford became mine…

One day my father was thinking it was a shame that the car was not driven much and decided he wanted to sell his classic. When he told me this I immediately made him an offer. But (after some thought) he declined, he thought the car was more worth than I was willing to pay.  I told him that if he changed his mind he would know where to find me.

A couple of months passed and the big Ford was not sold. When I reminded my father of my previous offer he said he would think about it. And a couple of days later I owned a classic car! 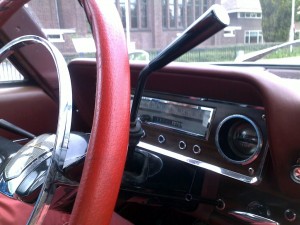 The car is easy to drive and pretty comfortable considering it is over 50 years old. It has no power-steering but when the wheels are turning the steering does not feel heavy at all. It does feel a bit vague around the center. So on higher speeds you are making a lot of corrections if you want to keep going straight. The whole car rolls a little when cornering but that also can be expected from a car this age.  The brakes are hmm… eh.. adequate. The engine pulls strongly and the car has no problems keeping up with modern traffic. Although it could use a fifth gear… And  the exhaust makes a beautiful burbling sound (but it is an aftermarket stainless steel one). View all around is excellent. This big classic is very useful for everyday driving!

Driving and maintaining the big Ford…

By continuing to use the site, you agree to the use of cookies. Close